My inaugural Storypearls blog post coincides with the inauguration of our 45th president. Our country is deeply divided. One way to bridge the divide is by sharing children’s literature pearls that move and inspire us. I hope to build a blogging community by discussing children’s books that have moved and inspired me and I invite all of you to share your own children’s literature pearls that connect to each particular blog topic.

In honor of our 16th president, Abraham Lincoln, and in honor of the sculptress, Vinnie Ream, I would like to highlight the beautiful, heartfelt picture book Vinnie and Abraham by Dawn Fitzgerald, illustrated by Catherine Stock and published by Charlesbridge that chronicles their relationship. I discovered this book when I was teaching fourth graders about Lincoln and recommend it particularly for grades 3-5. 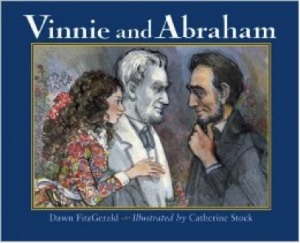 As a child, Vinnie had a gift for sculpting faces in clay that she gathered from the Wisconsin riverbank. When her family moved to Washington, DC at the beginning of the Civil War, she got a job at the post office sorting letters and her earnings helped her family. But Vinnie longed to have time to sculpt. Vinnie took charge of her own destiny when she knocked at the door of famous Washington sculptor, Clark Mills, who was so impressed by her talent that he offered her a job as his assistant. Congressmen came to sit for Vinnie and spoke highly of her sculpting abilities. She told them of her dream to sculpt President Abraham Lincoln, whose sad face touched her heart. The congressmen told the president about Vinnie and when he met her, he agreed to sit for her. For five months, the president sat for sixteen year old Vinnie in the White House as her fingers shaped the deep lines of his face. She called him “Abraham” in her mind.

But President Abraham Lincoln was killed soon after Vinnie had completed her sculpture. She wept with the rest of the nation.

Vinnie read that Congress wanted to hire a sculptor to create a statue of the late president and she applied for this job. Many people were opposed to the thought of a young woman as sculptor, but Vinnie’s prior bust of the president deeply impressed the judges. She was granted a commission from the government to sculpt the Lincoln statue. She welcomed the public to watch her as she worked. When her model was completed, she traveled to Italy for almost a year to sculpt the statue into the finest marble.

When the statue was unveiled under President Grant’s administration, Vinnie wept as she stood in the Capitol rotunda. There was her kind and sad Abraham for all to see. And her statue is still there in the Capitol rotunda for all of us to see. Let us remember Vinnie and her persistence and determination that fortified her to do the work she was meant to do, despite her age and gender.
Stories like Vinnie and Abraham can remind us of the greatness of America.

Do you have a favorite children’s literature pearl about Abraham Lincoln, Washington, DC, or a little known American who has made an important contribution? Thank you in advance for taking time to uplift us with your words.