Imagine a mole that digs holes underground during the day while at night, he relaxes in front of the television set.  Then he goes to sleep. This the pattern of his days and nights in the children’s literature pearl, Mole Music, written and illustrated by David McPhail, published by Henry Holt in 1999.  One night, Mole hears someone play the violin on television and the music is so beautiful that he wishes to learn to play the violin too.  Mole orders a violin and sends in his request through the mail.  Finally, the violin arrives!  At first, Mole makes loud, screechy sounds when he pulls the bow across the strings but little by little, Mole gets better and better.  The years pass.  Mole keeps playing. 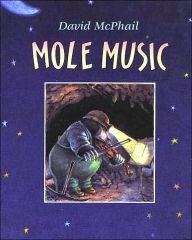 Mole has become so accustomed to being alone that he would be very surprised to learn how his extraordinary music does change the world above his dwelling.  This is a masterful story for all ages.  Each picture, including the picture on the cover, jacket flap, title pages, and beyond helps tell the story.  Every single word matters and complements the pictures.  Children will enjoy noticing the details in the illustrations depicting Mole’s underground rooms as well as the details in the illustrations that portray life above the ground.

Another picture book about the power of music was also published in 1999, this time by Dutton.

The Cello of Mr. O by Jane Cutler and illustrated by Greg Couch is for older readers—ages nine and up.  The narrator is an unnamed girl, about nine years old, who describes what life is like in a city affected by war.  Her father, along with the other fathers, is away fighting.

“Each Wednesday at four, the relief truck comes to a street right outside our square. We wait in line to receive soap, cooking oil, canned fish, flour.

Nothing is as it was: shops, cars, and apartments have been destroyed.  Schools are closed, the electricity is usually out, and there is no gas at all.  Even the telephones don’t work…” 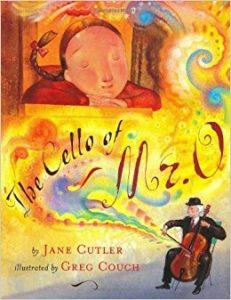 When the relief truck comes, Mr. O, a musician, waits on line with the others, but appears to be unfriendly and aloof.  In the apartment building where the little girl lives, Mr. O lives too.  He yells at the children when they run in the building and make noise.  The children do not like him. But there is another side to Mr. O.  When the relief truck comes at its appointed time one day, a missile destroys it.  The area is declared to be too dangerous even for a relief truck.

“Now we will have to walk for miles to get anything, and nothing will happen to make even one day a week better than the others.”

But something does happen to make things better, all because of Mr. O.  He brings a chair and his cello to the square and plays Bach for an hour every Wednesday at four.  The girl explains how the music “feeds us as truly as the supplies brought by the truck did.”

In the beginning of the book, Greg Couch’s illustrations portray a forbidding landscape with dull colors.  In contrast, the music that emanates from Mr. O’s cello is bright, beautiful, magical swirls of color.  Mr. O is not to be deterred, even after something sad and startling happens.

In these unsettling times, reading about the power of music in beautiful picture books such as these, where the words and the pictures truly work in concert, can offer us gifts of inspiration, hope, and respite from fear.